The bullet that killed businessman Ifeanyi Otu on 13 July was fired from almost 300 metres away, according to a forensic analysis of CCTV footage from the toll gate at Lekki Deep Sea Port,… 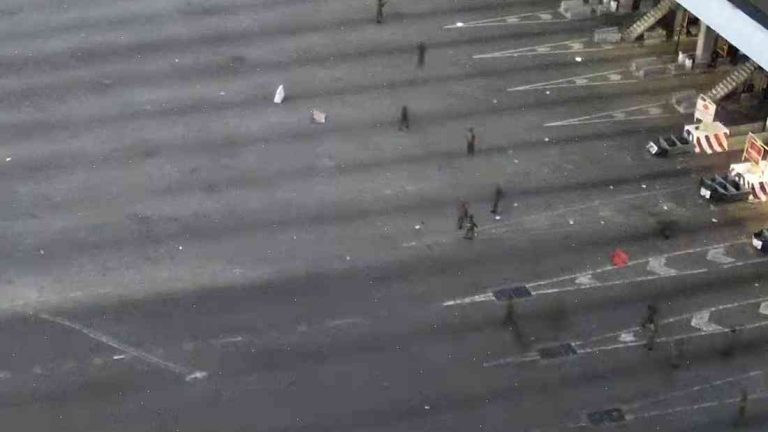 The bullet that killed businessman Ifeanyi Otu on 13 July was fired from almost 300 metres away, according to a forensic analysis of CCTV footage from the toll gate at Lekki Deep Sea Port, Lagos.

The analysis confirms a previous Guardian analysis, and thus points to an argument by police that the shooting was self-defence – that Otu opened fire first. However, the forensic analysis raises a new question as to whether the shooting was an avoidable tragedy.

Otu, 39, was shot twice in the back by police marksmen from a distance of 280 metres, according to the forensic analysis by Grant Thornton. That is in a 110 metre gap, close enough for witnesses to have seen Otu’s body sprawled on the ground. When followed by a forensic, manual examination of his wounds, and by videotape of the incident, the trajectory and trajectory associated with the bullet seems to support a shooting that cannot be directly attributed to self-defence.

A photo of Ifeanyi Otu taken by friends who were with him when he was shot. Photograph: Twitter

“This shooting was avoidable. Those injured on the lower bodies would not have been hit by a bullet from a vehicle. The bullet fell through him, by itself,” said Professor Mike Pote, director of forensic consultancy in forensic science at the University of London and co-author of the forensic analysis for Grant Thornton. “If the bullet had fallen first the injuries of his lower body, such as the trauma to his back and liver, would have occurred much later. Those injuries are not consistent with shooting.”

The Guardian’s analysis of the CCTV footage last week, immediately before a second set of police bullets killed the 46-year-old in an alley, lent further support to the possibility that the shooting was an unintended, or possibly involuntary, shooting. Police claimed the bullet went through Otu’s body and exited through the leg.

The forensic analysis published by Grant Thornton, not only supports those initial assumptions, but also says: “Also, it was obvious that the bullet had missed on the front of his left leg and had entered the inside of his right lower leg.”

Survivors of the shooting told journalists that Otu was on his knees in his own blood when he opened fire, and that the men within the car were unaware of this fact.

This contradicts a police claim that the bullet that struck Otu was “lateral entry” that penetrated through the body.

Even if if the bullet had penetrated through Otu’s body, and his body armour acted to reduce the circumference, Professor Pote said, there is no way for someone to see that. “If you are transparent, people around you know you are there and know you are being guarded and there is nothing you can do.”

The analysis concluded that, “although the shootings started in a volatile environment, the proximity to the toll gate was significant and the weapon was also significant.”

Otu was shot at about 11.15am on 13 July after he approached a police patrol car with three associates on the toll. The car stopped, police drew their firearms and began firing.

The gunmen wore orange security vests. Otu was wearing a T-shirt, T-barrel jeans and sneakers. The Ford S-MAX car that the gunmen were in has an orange sticker, identifying it as a white emergency vehicle that has been fitted with light lights.

Otu’s three associates did not have firearms, but they were trying to prevent the police from getting away with one of their cars. None of them were shot by police. Three of Otu’s associates are facing criminal charges.

The Police Special Anti-Robbery Squad – one of the police units involved in the shooting – said on Tuesday that police will conduct a full internal probe into the shooting, as the internal affairs command “welcomes a third-party review, which will be conducted independently”.