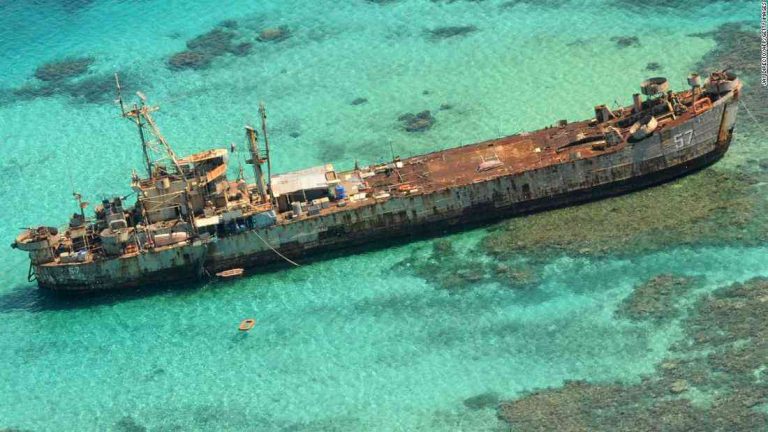 The Philippines navy has completed a resupply mission to South China Sea islands with the return of a frigate which was blocked by China for about three weeks.

The Independence class frigate was in Shanghai, bound for Subic Bay when it was detained on 1 January for 24 hours.

It had been conducting surveillance on Chinese territory after it was feared China was moving further into the disputed waters.

The blockade is part of China’s policy of reclaiming land in the area.

China claims almost the entire sea, arguing that it is covered by a historic boundary with the Philippines – which opposes the claims.

Experts say China’s reclamation works, including the “biggest artificial island in the Spratly archipelago”, has increased tensions in the region and could have some negative consequences for international relations.

US President Donald Trump recently raised concerns about the reclamation work and the US said it would send a warship close to the islands as a demonstration of its determination to protect the sea.

Philippine defence officials said the Independence class frigate received some food supplies while in Shanghai, but has had little contact with the fleet which accompanied it during the two-week transit.

They said they were now awaiting instructions from Manila on what would happen next, reports the BBC’s Richard Galpin in Manila.

One official told the Manila Times that the deployment mission could amount to a “kind of intelligence-gathering exercise”.

When the ship was seized, officials said it was doing routine surveillance work off the island of Subic, but China banned surveillance flights.

Philippine navy spokesman Rear Admiral Enrico Aquino said at the time that the ship had the necessary permission and was operating according to international rules.

“As far as the Philippines is concerned there is no country that is doing reclamation in this part of the world,” he told the BBC.

“There was no country in the world involved in this.”