And the Best-in-Show at the Westminster Kennel Club Dog Show, which aired on CBS, was … the brilliantly handsome, white Cossquawk, a 5-year-old service dog trained to sniff out dangerous narcotics hidden in cars…. 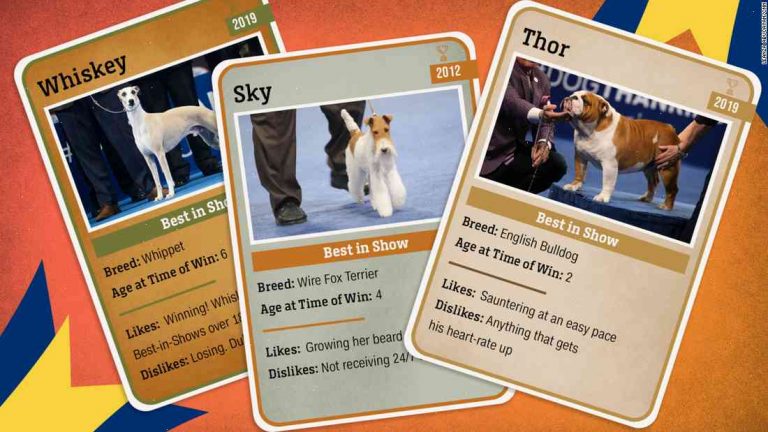 And the Best-in-Show at the Westminster Kennel Club Dog Show, which aired on CBS, was … the brilliantly handsome, white Cossquawk, a 5-year-old service dog trained to sniff out dangerous narcotics hidden in cars.

Now let’s relive some of the year’s other Best-in-Show winners to see just how impressive they were.

Barker, an Akita from Alabama with Kurtzman Sauer, won Best in Show at the Westminster Kennel Club in early February.

She’s known as Anita and was born in 2015. A complete list of 2018 American History Museum Winter Exposition Best in Show winners can be found here.

Gerry Lattin, of the Orange County Register’s OC-SDEXT blog, won Best in Show at Westminster in 1985. Lattin trained Mashi, a KiloBox retriever, and used to earn discounts on his gas from the Lattin station at the corner of Center and Manchester in Fullerton.

As a service dog, Mashi receives weekly training from volunteers who sometimes take the English bulldog to schools, hospitals and airports, where Mashi greets passengers before boarding planes and then pretends to be their dog if they need help.

The guests were from a region of Tanzania. They were invited to the annual Safari Club of America’s “Glamour Dog” Show.

Lisa-Ann Drozd, a county dog trainer from Santa Monica, California, became the winner of the Best in Show award at the Sonoma-Marin Fair in north Marin County. Drozd trained a smorgasbord of dogs including the husky Charlie, the portly boxer Sophie and the little red terrier Pennsylvanian Retriever Kristy.

She is the first California resident to win the Best in Show at the Sonoma-Marin Fair, according to the fair’s Web site.

Parker, a toy Poodle, has won Best in Show four times, including in 1975, at Westminster.

On the west coast, several others won Best in Show.

Maynard, a master’s presser, is a Golden Retriever who was trained by Winter’s Rescue of Long Beach. Breisgne Vincent, a rat terrier, won Best in Show at the Woolsey Fire Charitable Challenge held at a Rancho Palos Verdes home, owned by Clint and Keeley Shuffield.

Parker came to the rescue in August 2015 when a large dog broke into his neighbor’s house and bit him in the ankle. He was not injured, and he went to the Long Beach Animal Services Center to see if he could help train Maynard. Maynard fought an exterior wall for four hours as rescuers tried to free him.