Written by By Staff Writer While Tony Bennett says he will always be his favorite singer, Lady Gaga admits there’s one trait that comes close to winning her over: the height of his love… 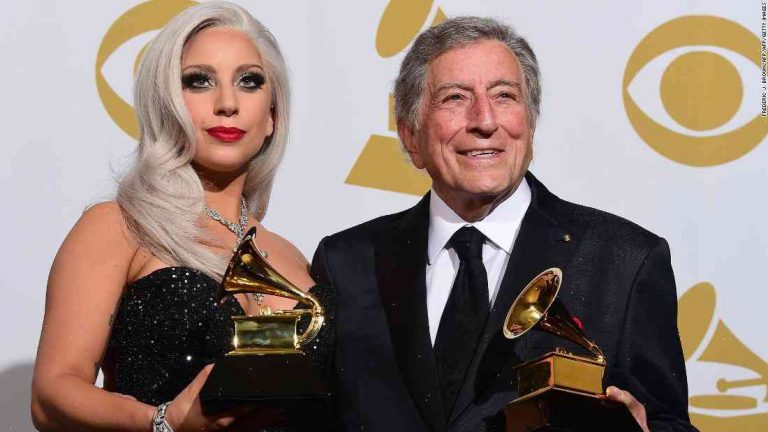 Written by By Staff Writer

While Tony Bennett says he will always be his favorite singer, Lady Gaga admits there’s one trait that comes close to winning her over: the height of his love for old music.

“He’s crazy about the blues,” Lady Gaga told CNN at the entertainment industry party organized by France’s National Assembly in Paris on Tuesday night. “For him that’s so amazing, it’s almost spiritual.”

“I remember walking through the doors at the Astor Hotel,” she recalls of Bennett’s famous New York stomping ground, “and I just felt it, and I’ll never forget it.”

But it’s not just their personal connection to deep blues hits that explains her feelings for the grand-singing jazz legend, 75.

“I know that Tony wants to continue in his career. He loves his work. That’s what he cares about.”

“He’s a nice person, he’s the kindest, most generous man and I just love him,” she told CNN, tearing up at the thought of him.

“He’s something extraordinary. Very lucky to know him and I miss him. It’s hard to go back.”

She says he even told her a few of his great songs they’ve recorded together (including Maggie May, My Funny Valentine and a version of Smokey Robinson’s Tears of a Clown) are “one of the greatest records I’ve ever made.”

“That’s the kind of guy he is,” Gaga continues. “He’s so humble and generous and the world needs more people like him.”

‘It makes me sad’

But as much as she loves him and the music, that’s not to say he doesn’t suffer from a serious illness.

“I know it’s not over for him. I know he’s suffering,” she confesses, crying. “It makes me sad.”

She’s just started promoting her third album, “Joanne,” named after her grandmother, which she says was also a tribute to him.

“With that’s all I ever knew,” she says, “He was my hero. We became very close very quickly and I adore him so much.”

Bennett appeared with Gaga during his performance at the NRJ Music Awards in France.