The Philippines agreed Wednesday to resume its resupply mission to disputed South China Sea islands after tensions eased, but Beijing demanded other countries respect its sovereignty over the waters in a message ahead of… 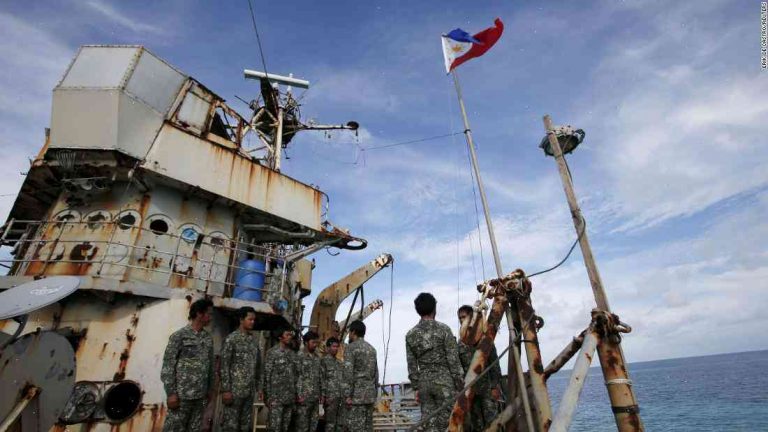 The Philippines agreed Wednesday to resume its resupply mission to disputed South China Sea islands after tensions eased, but Beijing demanded other countries respect its sovereignty over the waters in a message ahead of the first official meeting of the new ASEAN leadership in Manila.

Foreign Secretary Alan Peter Cayetano said his country made the change because “friction” in the South China Sea between China and some Southeast Asian countries was reducing. Manila suspended its resupply mission to the Spratly Islands in August after China repeatedly accused the Philippines of trespassing and said it would not allow such visits unless Manila apologized and quit its island-building efforts.

The Philippines said it still has sovereign rights over the Spratlys. It also had not made up its mind when to resume the resupply mission, which supplies navy ships operating in the contested waters.

“I don’t think there’s any pressure by China,” Cayetano told reporters. “We just needed to be more clear on what our mission is, what our intent is. The efforts of other countries in the South China Sea have helped alleviate the tension in the situation on the ground and helped relieve tensions in our region.”

The decision to resume the resupply mission came after Beijing congratulated the Philippines, the 10-member Association of Southeast Asian Nations’ chairman, ahead of the ASEAN summit on Saturday. The other 10 countries pledged to work together to improve relations with China, a major trading partner of the bloc, despite territorial squabbles with it.

Beijing’s diplomatic gesture suggests that China, which claims nearly all of the South China Sea and has worked closely with Manila to defuse territorial disputes, may be starting to take a more flexible approach with some Southeast Asian nations ahead of ASEAN talks. Other ASEAN countries, however, remain skeptical.

Anaplan, a Philippine think tank, said the resumption of the resupply mission, after a 6 1/2-month hiatus, “signals that neither the Philippines nor any other ASEAN member may have the ability to hold the line against China” and has a negative impact on the credibility of ASEAN.

It also calls into question the U.S. stance of standing behind its regional allies in the face of China’s assertiveness in the South China Sea. A report released in August said that China had deployed an advanced underwater drone in the disputed area that marks a significant step up in military capabilities.

Cayetano said the resupply mission won’t resume on Saturday but could happen as early as this week when the Philippines resumes its annual summit and other high-level diplomacy.

China had resisted a resumption of the resupply mission, fearing that it could signal the Philippines’ willingness to back down on disputes.

China claimed sovereignty over almost all of the South China Sea in 2013 and has built seven man-made islands on reefs in the Spratlys with the intention of militarizing them. Brunei, Malaysia, Vietnam, the Philippines and Taiwan also have rival claims in the sea, which is believed to contain significant oil and gas deposits.