Solomon Islands is reeling from four nights of violent protests in the capital Honiara. More than 90 people have been arrested after more than 50 people were injured in the violence, including dozens of… 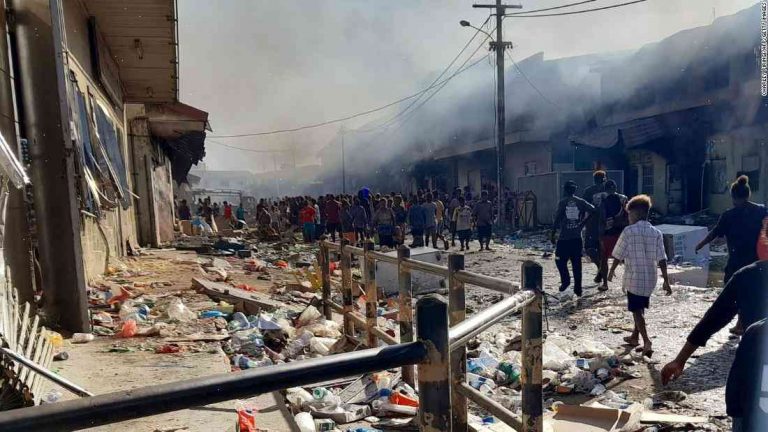 Solomon Islands is reeling from four nights of violent protests in the capital Honiara.

More than 90 people have been arrested after more than 50 people were injured in the violence, including dozens of local police officers.

On Sunday, a man was shot dead in the middle of the town while allegedly trying to steal a police patrol vehicle.

In an official statement, the Solomon Islands government said the public should stay at home and said it was unlikely all businesses would open on Monday.

“The Prime Minister is really saddened at the number of lives that have been lost and hurt by the state of unrest and non-sensical protests this weekend,” Prime Minister Manasseh Sogavare said.

“I know the deep anguish that has emanated from the ongoing unrest. Our people want to be happy but we know our neighbours have not been happy for a long time now,” he said.

Mr Sogavare said plans were being put in place to address the underlying issues in Honiara, and called on people to co-operate in the country’s development.

“Honiara is a city for development and we are not going to shy away from that fact, but unfortunately our peace and stability is being torn apart by the political and social disorder,” he said.

Also on Sunday, the government said close to 400 police officers from New Zealand and Australia would be deployed to the Solomons.

“We hope they will be able to restore calm to our country,” Mr Sogavare said.

Mr Tompkin said the arrests began on Saturday night when a meeting was held to discuss the ongoing unrest in Honiara.

The meeting was held at the Civic Centre when four men stole a police patrol car.

They then left the centre, but a minute’s silence to remember the deceased was declared and the car was set alight.

Mr Tompkin said 12 men were taken into custody for arson and breach of peace, while 18 women were held for breaching the peace, disorderly conduct and resisting arrest.